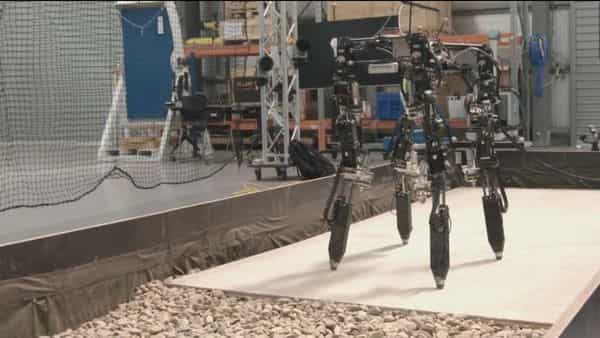 Scientists at Norway’s University of Oslo have developed a novel solution to how robots can adapt to walking on different surfaces. Their new robot, named DyRET, can change the length of its length and body shape based on the surface it walks on. Essentially, it’s a machine adaptation of how humans naturally change their body’s centre of gravity based on the surface they’re walking on. DyRET stands for Dynamic Robot for Embodied Testing.

The researchers published a study in scientific journal Nature, explaining their achievement. The robot uses 3-D cameras and force sensors to detect the surface it’s walking on. When it detects a new surface, it takes a pause and changes the length of its legs and body shape to adapt to the new surface. The force sensors feel how hard the ground is to help the robot detect different surfaces.

The scientists also tested the robot in real world situations and noted that the robot will be steadier when it has shorter legs. They used machine learning algorithms trained on the “best leg configuration” for different terrain types. This allowed the robot to continuously predict what its body shape and leg length should be. The scientists also demonstrated the same through a video.

“Each of DyRET’s four legs has two telescopic sections, so that it can change the length of its thigh or shin bones. The adjustments are made by motors built into the legs and the lengths can be changed automatically while the robot is operating,” the researchers wrote in The Conversation.

The robot can change its height by about 20%, shifting between 60cm and 73cm tall. “With short legs, DyRET is stable but slow, with a low centre of gravity. In its tallest mode, DyRET is more unstable while it walks but its stride is much longer, allowing it to travel faster and to step over obstacles,” the researchers wrote.